I’ve lacked motivation to run long training runs recently. Granted I’ve fought off some minor injuries over the past six months, but am planning to keep up my distance running as long as my legs don’t fall off. To do so I know I can’t just run races. I actually have to train a bit too. Since my last marathon six weeks ago, my longest run was just over 13 miles. Not necessarily high quality miles either. I’ve averaged roughly a marathon or longer race per month for the last 43 months, but part of that was from chasing my 50 state marathon goal (completed in January 2015) and actually doing decent training miles. For some reason I keep getting older and slower as the years slip past. I don’t know why I thought I’d keep getting younger and faster, but the laws of time and cell death rule.

This week in a weak moment of brilliance I thought the best way to get in some long training miles would be to sign up for a race. I have marathons on my calendar for both May and June. A few days ago I signed up for a race. Not a marathon, but a 50k. Nothing like running 31 miles to train for some 26 mile races. If my legs recently felt dead after 13 mile runs, I’m sure they’d feel great for 31.

To shorten the drive to the start at the Chippewa Moraine Interpretative Center near New Auburn, WI, I drove as far as Eau Claire, WI on Friday night. A friend lives in the Twin Cities, but teaches at UW – Eau Claire. (He and a few other professors share a small apartment for times they want to avoid the 90 minute commute home to the Twin Cities.) Thus I had the vacant crash pad in which to sleep before a short drive to the race early on Saturday.

On my drive east I listened to a tribute anthology of Prince music on the radio. While I drove east along the hilly and curvy highway approaching Menomonie, WI, I noticed the full moon rising and surfing the hills of the horizon. Due to particles in the atmosphere it loomed large and orange. As the road dropped into valleys, the moon would disappear. Then rise in tandem to the next elevation lift of the interstate. At one point the road flattened and the moon was poised to the right of the road ahead. In an instant I saw a parallel shooting star along the left side of the road. Coincidentally a minute later my mind focused on the immediate lyrics playing to Prince’s song “Call My Name”. 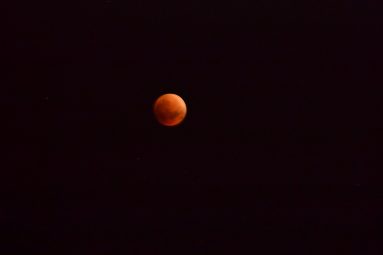 The music and celestial entertainment made for a nice drive.

After an early drive on Saturday morning I got to the interpretive Center, which sits high on a hill that was created from the sand, gravel and rocks deposited by melting glaciers. The Ice Age Trail meanders through much of Wisconsin and this location serves as one access point to that trail. The race runs an out and back section along this trail.

Runners milling about the visitor center.

After my pre-race preparation, greetings with a few friends, and a couple of pictures we were off and running. Since I wasn’t intending to push my pace, but merely wanting to finish, I lined up near the rear of the herd of runners. My strategy for ultra races (longer than marathon distance) is generally to walk the steep uphills and run the flat and downhill sections. The rolling terrain includes 4600 feet of elevation change (according to my GPS watch, not necessarily accurate) over the 50 kilometers, so I would have ample walking breaks.

I started running with my friend Jordan in the early miles. Jordan is graduating from the University of St. Thomas in a month and although young, has already completed eight or nine 100 miles races. He traveled with me last August to the Black Hills where I ran my only 100 mile race to date. Just a few weeks ago he attempted to run three 100 mile races over three consecutive weekends. He completed over 200 miles in those attempts. This 50k would just be a “fun” run for him. 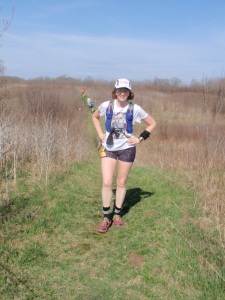 Janet stopping for a picture.

Before the first mile was up we caught up to my friend Janet. I would end up running most of the race with Janet. About a mile and three-quarters into the race my incessant yapping got the best of me and I tripped over a root and went down fairly hard. Skinned my knee, but was otherwise okay. Jordan had been just behind me and employed the strategy of “pass the weak, hurdle the dead.” He stayed ahead of me for the rest of the race and beat me to the finish by twenty minutes or so. At the next aid station I realized I was carrying a few sticks from the course with me from my fall. 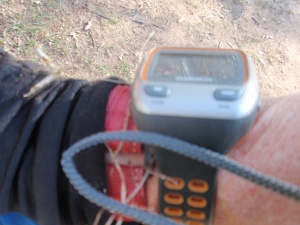 Sticks in my watch.

The weather and trail conditions were the best I’ve seen in the four years of running this race. It was in the low 40’s at the start and rose into the mid 60’s by the finish. As the day warmed, clouds moved in to blunt the heat. Winds were mostly gentle with a few higher gusts. Aside from a few muddy spots, the trails were perfectly dry. Leaf detritus from last autumn only covered some of the rocks and roots. As I ran past my friend and erstwhile race director Jeff, I gave him a hard time about not drying out those last few muddy spots on the course for us. 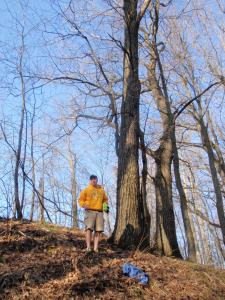 This race course travels through beautiful country. Over hill and dale, it traverses ridge lines and pot hole lakes. The early spring foliage is sparse so the views are unimpeded. Aside from a few gnats late in the race, the insects are not defending their territory yet. Several small bridges of varying structural integrity assist runners across damp spots along the way.

Mostly above the waterline.

I decided to try to set a good pace for Janet for as long as I could and mostly stayed just ahead of her for the first half of the race. After the half-way turnaround, it became obvious that Janet was setting the pace for me. Either that or she kept trying to drop me and I wouldn’t give up.

At the last aid station with three miles to go, I needed to have the bladder of my hydration pack refilled with water. Janet took the opportunity to leave me in her dust. She beat me to the finish by three or four minutes. My intentions to pace her for the race thus turned into her pacing me, or rather schooling me on how to run tenaciously to the finish. Darn! Chicked again in a race!

I pulled into the finish at 7:56 on the clock, or about twenty minutes slower than I was last year on this course when I was much younger (where is the sarcasm font when you need it) and in better shape. I was able to recover and caught up with Janet and Jordan. I hung out with friends for a bit after the race before starting the drive home.

Flags marking the last turn to the finish.A

Done with only minor scars.

Probably not the best training strategy for future race preparation, but at least I got a long run completed. One day I will not be able to continue running and racing. Until then I’m going to seize the available opportunities. One foot in front of the other. Repeat.