I had the fun of running the Gandy Dancer Trail Marathon this weekend. A dear friend, Christine, invited runners from our run club to partake in this small town event. She offered free lodging and some food. I was sold.

Christine and Katie ran the half marathon and I ran the full. Christine’s boyfriend Paul and Katie’s husband Michael constituted the moral support crew. We arrived early for the race. Paul drove over in one of his restored historic military vehicles. This is a Mighty Mite, a smaller version of the Jeeps made famous in WWII. The Mighty Mites were first prototyped in 1946. 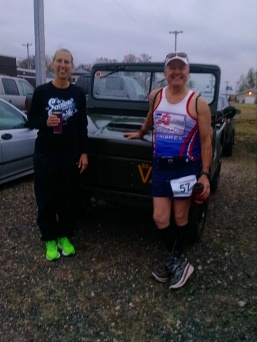 The marathon consisted of two half-marathon out and back distances along the Gandy Dancer Trail. The first one went southbound 6.5 miles and then returned to the start area. The second half of the marathon did the same thing beginning by heading north. The half marathon started an hour after the full and just did the out and back to the north. The weather was comfortable with heavy cloud cover, strong southerly winds and a constant temperature in the upper 50’s. The threatened rain never materialized.

The trail is made of dirt, gravel and occasional stretches of moss. Most of this section of the trail is tree-lined through rural Polk County. It passes through the towns of Milltown, Luck and Frederick. While the thick cloud cover masked the effect, the fall colors were peaking this weekend and provided a beautiful canvas of eye-candy scenery as we made our way up and down the trail. I reconnected with several friends including Jim Wilson, Mary Erb, brothers Craig and Michael Swanson and race director Eric Olson. Good to share a few words and/or steps along the trail with them. If you added up the marathons and ultra marathons completed between Jim, Craig, Michael and Eric, you would have a number close to 500. Eric shared a comment with me before the race. He said when asked why he runs so many marathons, he said “It’s the slowest way to die. And maybe the most expensive.” (He didn’t claim to originate the quote, but liked it.)

My race went well for the first twenty miles or so and I stayed ahead of my pace for the Twin Cities Marathon last week, but my legs fatigued a bit too much in the final stretch and my walking breaks helped me to finish thirteen minutes slower than last week (4:56 vs 4:43). I was happy to get another completion and remain injury free. Christine and Katie had good races and we all made it over the finish line. 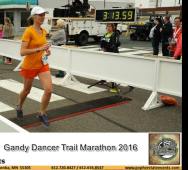 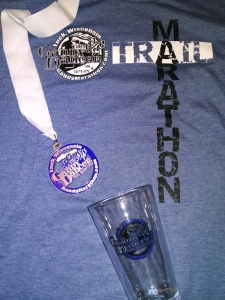 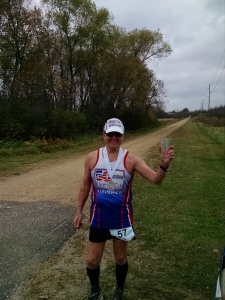 After the race we returned to Christine’s house for lunch and a special treat. Christine recently moved back to her roots to re-join the family business, Anderson’s Maple Syrup. Her grandparents began a maple syrup side business on their farm in the 1920’s. The business grew to the point where her grand parents gave up farming and went full-time into the syrup business in the 1940’s. Christine’s parents assumed the reins until her brother took over the business in the late 1990’s. The business has grown from the early years into a large scale operation. Before heading home yesterday, Christine took us on a tour of the family business. 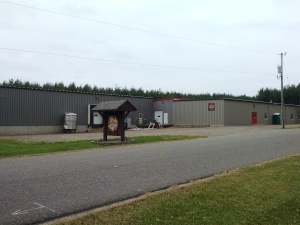 After the tour we said our goodbyes and headed on our way.

After arriving home, I called Anne, who was away visiting friends this weekend. After describing my weekend to her, she asked if I had brought home some pure maple syrup. I knew I forgot something! Why am I fighting a serious craving for pancakes today?